In this article, Steven Fleming PhD, our Director of Embryology discusses the nature of GM-CSF, the rationale for using it and its clinical benefits.

What exactly is GM-CSF?

As its name suggests, GM-CSF is a classical lymphohaematopoietic cytokine that is known to be a mediator of cell proliferation and differentiation in hematopoietic tissues.1

Cytokines are potent cell-secreted intercellular signaling proteins that may have an autocrine, paracrine or endocrine effect at nanomolar to picomolar concentrations, binding to specific cell membrane receptors to activate intracellular signaling pathways.

GM-CSF is one of a family of pleiotropic cytokines also believed to be involved in the regulation of diverse reproductive functions including gamete maturation, ovulation, embryogenesis, implantation, pregnancy, and parturition.2

The rationale for adding GM-CSF to culture media

In this respect, GM-CSF has been shown to be produced and secreted from the human oviductal and endometrial epithelium.3,4  Levels of GM-CSF reach a peak during the secretory phase of the menstrual cycle4,5, which coincides with the time of conception and implantation.

The GM-CSF receptor is a dimer comprised of a cytokine-specific alpha subunit (GM-Rα) and a signal transducing beta subunit (βc), βc forming a high-affinity complex with ligand-coupled GM-Rα.6 However, GM-Rα can also act alone, for example, to mediate the effect of GM-CSF on glucose transport via a kinase-independent pathway.7 Indeed, GM-CSF has been shown to promote glucose transport in the embryo, which expresses the GM-Rα receptor throughout preimplantation development.8,9 A beneficial role of GM-CSF during embryogenesis was first demonstrated 20 years ago in the cow.10

In a knock-out mouse model, GM-CSF was shown to be obligatory for normal embryo development, implantation, and fetal viability.11

The clinical benefit of EmbryoGen/BlastGen

Possible modes of action of GM-CSF

An early study, with autologous endometrial co-culture of embryos from women with RIF, demonstrated a significant positive correlation between clinical pregnancy rate and the level of GM-CSF secreted by the endometrial cells.15

The embryotrophic effect of GM-CSF suggested by this study correlates well with clinical benefits experienced after embryo culture in EmbryoGen and BlastGen.

In addition, GM-CSF is able to upregulate its own expression within the endometrium, suggesting that it also has an autocrine effect16 (Figure 1).

Interestingly, it has been reported that women suffering unexplained recurrent pregnancy loss (RPL) have markedly reduced levels of GM-CSF in their systemic circulation during the first and second trimesters of pregnancy.17

Although embryonic aneuploidy rates are higher in women experiencing RPL18, aneuploidy alone cannot explain its occurrence in all cases. Therefore, it is likely that RPL occurs in a significant proportion of women due to alternative factors of embryonic and/or endometrial origin.

Since embryos exposed to EmbryoGen/BlastGen have shown increased implantation, pregnancy and live birth rates in women with RPL and RIF, it is probable that GM-CSF is acting as a growth and survival factor.  Subsequently, it may be altering the metabolism of the embryo in such a way that it is able to appropriately signal to the maternal endometrium that it is viable and, consequently, the pregnancy is sustained. Hence, it would appear that the embryos of some couples struggle to remain viable under routine culture conditions but may be rescued when cultured in EmbryoGen/BlastGen.

Is EmbryoGen/BlastGen safe to use?

To date, there are no reports of any adverse events following transfer and live birth after use of EmbryoGen and BlastGen. In addition, GM-CSF has been found to have no negative impact on rates of aneuploidy or mosaicism in embryos.19,20 Since it occurs naturally within the reproductive tract, it is unlikely that it should have any deleterious effect either upon the embryo or within the uterus.

Professor Sarah Robertson PhD, Director of the Robinson Research Institute at the University of Adelaide, Australia, has written an article GM-CSF in IVF Embryo Culture in the November/December edition of our scientific newsletter – ART Scientific.

ART Scientific is a quarterly publication that explores current topics of interest in our industry.  It is written by a community of experts in the field and has a science focus at its heart. 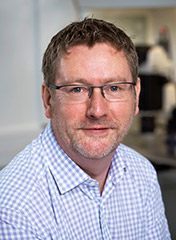 David has worked as a Clinical Embryologist since 1986, training in Manchester, where he also completed his doctorate studies. He has since managed laboratories in a number of UK IVF units including those in Nottingham, London and Leeds. He has also consulted to IVF units in Malta, India, the Philippines and Zimbabwe.

He joined ORIGIO as Director of Embryology in November 2011 and, in January 2019, was appointed Director of Clinical Support for CooperSurgical Fertility and Genomic Solutions, focusing on post-marketing clinical studies, QA/complaints and laboratory audits.

He has previously served as Chair of the UK Association of Clinical Embryologists (ACE) and Association of Biomedical Andrologists (ABA), and was involved with several working groups, notably the HFEA Expert Group on Multiple Births after IVF. David has a keen interest in quality management, including ISO certification and External Quality Assurance.